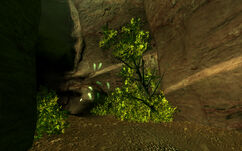 The Fallen Rock cave is a location in Zion Canyon in 2281. It is located at Eastern Virgin, across from Angel cave.

Before the war, the cave was used by a United States Geological Survey research team. When the war broke out, they fled, most likely trying to get back to their families. They left behind large amounts of food, which would later prove useful to Randall Clark. After hiking from his disabled truck after the destruction of Salt Lake City, Clark found the cave and stayed there while the radiation outside reached lethal level. The supplies that the research team left behind and the water found in the cave proved invaluable, as Clark was forced to stay in the cave for several months. He soon moved on after the radiation cleared, leaving the cave abandoned.

One entrance to the cave starts as a small, circular room. There are mines and trip-wires connected to rigged shotguns throughout the cave. There are also some boxes of ammunition lying around, often near the shotgun traps. The traps extend throughout the entire cave.

Towards the center main room at the split leads to more mines and shotgun trip wires. There is also a mine hidden behind a teddy bear in the entrance of the central room. In boxes and crates are aid items and ammunition. There is also the Compliance Regulator, a workbench crate and one of the six hidden survivalist caches. There is a terminal with two lengthy diaries on it. Eastwards are more mines and a skeleton with a recharger pistol.

To the very east is an exit to Eastern Virgin with a tripwire and grenade bouquet just before the water. Disarming the grenade bouquet (located at the beginning of the down-sloping exit hallway) requires jumping to reach it. Both exits are close to Angel cave.

Compliance Regulator
Add a photo to this gallery

Retrieved from "https://fallout.fandom.com/wiki/Fallen_Rock_cave?oldid=3469258"
Community content is available under CC-BY-SA unless otherwise noted.