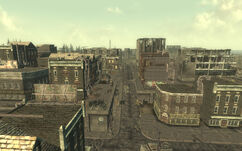 “We've secured the building and are currently implementing our orders for the occupation of Fairfax. Raider activity in town has increased since we first took up positions in and around the fort. We've killed a lot of them and scared off others. But they just keep coming back. Their numbers seem limitless, while requests for our own reinforcements are repeatedly denied. That the Raiders take such continued risks to invade our facility appears to confirm suspicions that we've had an intelligence leak.”— Fort Independence field report 1

Fairfax ruins are the destroyed shops and dwellings of a town in the Capital Wasteland in 2277. It is located south of Vault 101, east of Fort Independence, and north of Andale.

The ruins consist of the main street, several alleys, and destroyed houses. There are upwards of twelve well armed raiders in the vicinity, on the street and in the tunnels beneath. North of the main road running through the center of the town east to west, is the entrance to the Fairfax Metro station. There are also a pair of manholes and a pit trap leading to the utility tunnels. There are various traps that may attract the raiders' attention if set off. One may also run in to frag mines by fast-traveling here. Outside one of the houses on the outskirts of town, is a gas valve that, when repaired, allows the ability to burn enemies by shooting them inside the house.

The main entrance to the utility tunnels is a grating in the floor that collapses into a small rectangular hole in the center of Fairfax ruins. A far less defended entrance to the tunnels is a manhole located to the northwest of the ruins to the east of the Brotherhood Outcast base. Inside are several raiders, ammunition boxes, aid items, and other loot.

There is also a separate subway tunnel in the center of Fairfax ruins guarded by two raiders. This subway has no links to any other areas, but there are various ammunition boxes lying around. When entering the tunnel, there are some mines as well as a shotgun trap close to the entrance. The tunnel is, like the rest of Fairfax ruins, inhabited only by raiders.

Fairfax ruins appears only in Fallout 3.

The Fairfax ruins are based on the real world Fairfax, Virginia.

Retrieved from "https://fallout.fandom.com/wiki/Fairfax_ruins?oldid=3466186"
Community content is available under CC-BY-SA unless otherwise noted.