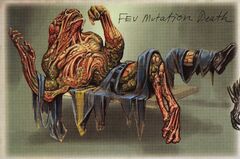 Failed FEV subjects are mutants that were once humans. They can be found in Vault 87.

They are hideously mutated Vault 87 FEV test subjects. In the Vault 87 terminal entries, a vast majority of the deaths logged in the computers were caused by FEV experimentation.

Failed FEV subjects appear to have undergone much of the same physical changes that other super mutants went through after FEV exposure, such as greenish skin and increased muscle mass and bone density. However, their internal structures seem to have grown at a random, rapid pace throughout their body, resulting in the muscles and bones bursting the skin, killing them in a horrific and painful fashion. The failed FEV subjects' upper torsos are much larger and far more visibly mutated than their legs, with enormous tumor-like growths blooming from the neck and shoulders. They all wear tattered Vault 87 jumpsuits.

Found in the Vault 87 test labs, they are all dead and their holding cells have a small amount of radiation. According to the Vault 87 laboratory computer, they are among many of the FEV test subjects that have died due to their brains being unable to support even the most simple actions of the human body and behavior after being injected with FEV.[1]

The two failed FEV experiment's entries in the G.E.C.K. suggest they were originally planned to be live enemies at some point since their S.P.E.C.I.A.L. attributes are already written out and they possess super mutant dialogue. However, they have no AI or animations. Therefore, upon resurrection, they will lie where they are, spouting super mutant dialogue and appearing as red blips on the radar. Any damage to their bodies, however, will cause the game to freeze. They serve no purpose except to add to the background of the FEV experimentation at Vault 87. 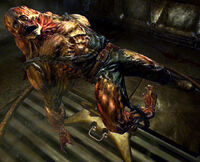 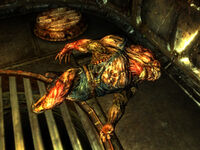 Retrieved from "https://fallout.fandom.com/wiki/Failed_FEV_subject?oldid=3263320"
Community content is available under CC-BY-SA unless otherwise noted.