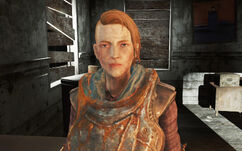 “A new player in Goodneighbor. Hello little Pawn. Welcome to our fun and games.”

Fahrenheit is the bodyguard and friend of John Hancock in 2287.

A serious-looking woman, Fahrenheit is a scarred, tough mercenary, the type to shoot first and ask questions later. Extremely loyal to her boss, she values trust above anything else. As a typical Goodneighbor resident, she will do anything, even if it means lethal force, to serve her boss and community.

The Big Dig: Having already received word that Bobbi No-Nose and her heist team, including the Sole Survivor, are going to break into his storehouse, John Hancock sends his bodyguard Fahrenheit and a few members of the Triggermen to intercept the group.

Fahrenheit appears only in Fallout 4.

In the Fallout 4 Vault Dweller's Survival Guide, Fahrenheit is referred to as Hancock's "main squeeze," implying that she may be one of his lovers. This seems to be contradicted by the game itself, where she is marked as Hancock's daughter instead, and characters refer to her simply as his bodyguard and make no allusion to a deeper relationship between the two.

If one pickpockets her armor, when you leave and come back she sometimes has the armor back on her.[verified]

As seen during an interaction

Fahrenheit's maxed hero card in Fallout Shelter Online
Add a photo to this gallery
Retrieved from "https://fallout.fandom.com/wiki/Fahrenheit?oldid=3465024"
Community content is available under CC-BY-SA unless otherwise noted.