The faded visor is a piece of headwear in Fallout 4.

A faded blue visor with adjustable strap, Timlist is embroidered onto the front of the band in dark blue letters. The faded visor increases Perception by 1 when worn.

The faded visor can be worn in conjunction with headwear that does not cover the face, giving the player character bonuses from glasses, hat and the visor itself. Hats include the wrapped cap, green hood, pompadour wig, yellow slicker hat, fisherman's hat, mascot head, High Confessor's helm and the Tinker headgear. The faded visor can also be worn with the hooded rags which usually remove any headgear. 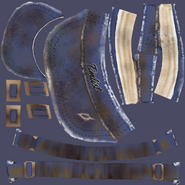