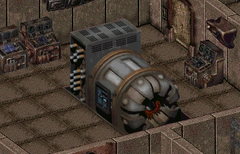 Get the note from ZAX

FEV research is a note in Fallout.

This can be downloaded into the Vault Dweller's Pip-Boy 2000 via dialogue with ZAX 1.2 in the Glow. The player does not actually receive a holodisk inventory item.

As China became increasingly aggressive with their use of biological weapons, the United States government felt that a countermeasure was needed. The Pan-Immunity Virion Project (PVP) was officially formed September 15, 2073.

It became clear that the best way to combat the newly created biological weapons was to alter uninfected DNA so that it was no longer susceptible to standard viral infection.

Unforeseen side effects began surfacing in early 2076 with the PVP. Animal test subjects began showing an abnormal growth rate accompanied by increased brain activity. The U.S. government took notice of these discoveries, and in the interests of national security, moved a team on-site to secure and oversee the project, which was now dubbed the FEV (Forced Evolutionary Virus) project.

FEV nears completion. Test on lab animals are at a near 100% success rate. Size and muscle density increase approximately 60%, and the potential intelligence increase by 200%. Effects upon human subjects remain unknown; although they are theoretically promising. The military, wishing to continue further testing, builds a large facility at the Mariposa military installation in central California. At this new facility, testing of the FEV virus continues on volunteer subjects from the military.

Retrieved from "https://fallout.fandom.com/wiki/FEV_research?oldid=3400394"
Community content is available under CC-BY-SA unless otherwise noted.