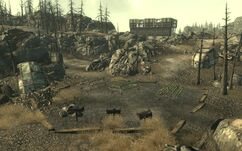 The F. Scott Key Trail & Campground is a camping ground located south of Girdershade and north of the Dunwich building in the Capital Wasteland.

The campground is not much more than a couple of park benches and a small tow-camper, yet it is of note because it is one of the places where a copy of the deathclaw gauntlet schematics can be found. Around the edges of the camp are a few mole rats, robobrains, yao guai, radscorpions, one or two deathclaws, and sometimes sentry bots.

There is not much loot in the camp that can be seen. However, there are many human remains, most of which are now bones. There is a rather rare sight of an infant's remains on the ground by the picnic table, right to the east of the trailer, and next to the scenic overlook sign.

A wastelander lives in the camper van from where the schematics may be acquired. They will typically be attacked by the nearby creatures, and will almost certainly be killed by them, without intervention. Even then, the wastelander has a very low chance of survival, and saving them unlocks no additional dialogue choices, as all they will say is "I have nothing to say to you." upon interaction.

Once Broken Steel is downloaded, albino radscorpions will appear here.

The F. Scott Key Trail & Campground appears only in Fallout 3.

The name of this location is a reference to Francis Scott Key, writer of the lyrics to "The Star-Spangled Banner", the national anthem of the United States. Although there are several other locations and landmarks in the real world named after him, the campground exists only in Fallout 3.

Duck and Cover!
Add an image to this gallery
Retrieved from "https://fallout.fandom.com/wiki/F._Scott_Key_Trail_%26_Campground?oldid=2870577"
Community content is available under CC-BY-SA unless otherwise noted.