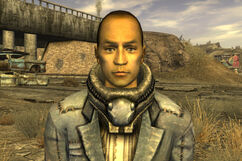 “You look like someone with a question. What can I do for you?”

Ezekiel is a member of the Followers of the Apocalypse, camping out at the 188 trading post in 2281.

Ezekiel is an anthropologist with the Followers of the Apocalypse, traveling around the Mojave Wasteland studying the history and cultures of local settlements and tribes in the region. He shows great interest in the Great Khans, having in-depth knowledge about the tribe and their history, feeling sympathy for their tragic past.[1]

Oh My Papa: When finding some way for the Khans to reclaim their glory, the Courier will be sent to Julie Farkas, who will then send him or her to Ezekiel. Ezekiel is in possession of a book called Pretty Pretty Horsies: A History of the Mongol Empire.[2]

Retrieved from "https://fallout.fandom.com/wiki/Ezekiel_(Fallout:_New_Vegas)?oldid=3155122"
Community content is available under CC-BY-SA unless otherwise noted.