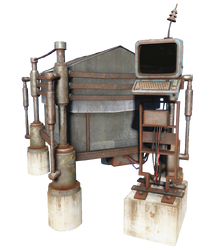 The eyebot pod is a constructible settlement item added in the Fallout 4 add-on Automatron.

It can be found in the special tab after picking up the schematics in the Mechanist's lair. Once constructed, it requires six power to activate. Once active, the player character can use the terminal to select any of the listed types of crafting materials, ammunition, or explosives.

Afterward, the container opens and releases an eyebot that immediately starts searching for the selected item, triggering a two-stage miscellaneous quest to retrieve it from a radiant location. The pod terminal also offers the same functionality as the standard terminal that can be built in a settlement. When connected via wiring to spotlights, turrets, and switches, it can be used to control these systems as usual.

Following is a list of items the eyebot can be tasked to search in the wasteland, sorted by category.

A jury-rigged eyebot pod can be found in the wasteland as a random encounter. It can be used in the same way as a regular eyebot pod to search for components, although the terminal seems to have some data corruption. Possible encounter locations include:

Jury-rigged eyebot pod east of Somerville Place
Add a photo to this gallery
Retrieved from "https://fallout.fandom.com/wiki/Eyebot_pod?oldid=3294899"
Community content is available under CC-BY-SA unless otherwise noted.