Eyebots, alternatively stylized as EyeBots, are robots found in Appalachia.

One of the more elegant creations of RobCo Industries, the Eyebot is a hovering robot designed for a variety of purposes.[1] On the surface, it was designed for giving consumers instant access to radio and television on the go. It uses a sophisticated antenna array to deliver the latest news bulletins and presidential addresses even in subterranean areas like subways. However, it was also outfitted with advanced facial and auditory recognition technology, making it a useful tool for surveillance and security.[1][Non-game 1] RALPHIE the Robot's Incredible Odyssey! was a popular Pre-War broadcast about the titular RALPHIE eyebot.

Although the design was compact and quite sophisticated, there was still room for Post-War expansion. The Enclave attempted to create a line of superior Duraframe Eyebots at Adams Air Force Base, but eventually scrapped the program, leaving one survivor.[2] Usually found near settlements or cities, the automated bases of Hopeville and Ashton later reproduced these robots in number, creating dedicated repair and medical variants, showcasing the potential still remaining in the Eyebot.[3]

Eyebots are seldom hostile. They occasionally attack hostile creatures, and some Eyebots might reveal certain locations as they fly by. They can be easily defeated in battle. Eyebots are capable of carrying out a variety of other tasks as well, as seen with Rover. EyeBombs are equally flimsy, but will explode on proximity or upon taking damage.

Red-painted Eyebots that explode on death or when approached. They are summoned during the Encryptid event to assist the imposter Sheepsquatch. Also appear when robots are the enemy in Daily Ops.

An Eyebot that has been reprogrammed by the Blood Eagles, encountered in the Watoga Underground.

Eyebots with the Watoga emblem painted on their hull. Encountered around Watoga.

A Chinese red colored variant at Camp McClintock only during the quest Live Fire Training Exercise.

An Eyebot found at the the Whitespring Resort.

Although most terminal and subtitle references use "Eyebot", the NPC record nameplate uses "EyeBot".

The Eyebot resembles the Sputnik-era satellites, predominately the Sputnik 1, an artificial Earth satellite launched by the Soviet Union in 1957. 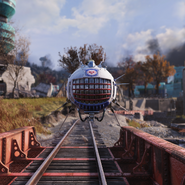