Eyebots are a type of robot found in the Commonwealth and Nuka-World in 2287.

One of the more elegant creations of RobCo Industries, the Eyebot is a hovering robot designed for a variety of purposes.[1] On the surface, it was designed for giving consumers instant access to radio and television on the go. It uses a sophisticated antenna array to deliver the latest news bulletins and presidential addresses even in subterranean areas like subways. However, it was also outfitted with advanced facial and auditory recognition technology, making it a useful tool for surveillance and security.[1][Non-game 1] RALPHIE the Robot's Incredible Odyssey! was a popular Pre-War broadcast about the titular RALPHIE eyebot.

Although the design was compact and quite sophisticated, there was still room for Post-War expansion. The Enclave attempted to create a line of superior Duraframe Eyebots at Adams Air Force Base, but eventually scrapped the program, leaving one survivor.[2] Usually found near settlements or cities, the automated bases of Hopeville and Ashton later reproduced these robots in number, creating dedicated repair and medical variants, showcasing the potential still remaining in the Eyebot.[3]

The variant seen in Fallout 4 appears to be specifically designed for reconnaissance and surveillance, but are still often used to broadcast information and propaganda. Both the Commonwealth Minutemen and Brotherhood of Steel sometimes utilize eyebots for such reasons.[4]

Eyebots are floating, spherical robots with various antennas, a large speaker on their front ends and a small, very weak laser weapon mounted underneath. Encountered throughout the wasteland, they are broadcasting radio stations, pre-War advertisement loops or just static.

Eyebots cannot be "activated" (spoken to or pickpocketed), but they can be killed or hacked via the Robotics Expert perk. They are one of the weakest enemies in the game and can generally be destroyed with a single hit from most weapons. Unlike the eyebots encountered in previous Fallout titles, eyebots in the Commonwealth do not explode upon death. They are also the only robots in ‘’Fallout 4’’ that cannot be created at the robot workbench.

The basic eyebot model. It can be seen roaming Diamond City and random places in the Commonwealth. One particular eyebot has a loudspeaker advertising jobs at Cambridge Polymer Labs.

Servomech eyebots serve under the Mechanist and can be distinguished by their yellow paint scheme and additional front armor. They are low leveled and are easy to encounter. Some may carry and play the Mechanist holotape.

This eyebot also serves the Mechanist and uses a laser gun as a weapon to attack the Sole Survivor. Although it has pretty low health on lower difficulties, it may be hard to hit due to its erratic movement pattern.

During the final fight of Restoring Order, some variations of the eyebot may appear with the name of "Trashbot." These eyebots resemble the normal eyebot, but have rusted chassis and are significantly weaker.

The basic eyebot model with a Nuka-World paint scheme. They can be found roaming Nuka-World, with especially large quantities in Galactic Zone.

A basic eyebot with a gold and white paint scheme encountered in areas of Nuka-World's Galactic Zone, such as in the RobCo Battlezone.

Eyebots appear in Fallout 4 and its add-ons Automatron and Nuka-World.

The eyebot resembles the Sputnik-era satellites, predominately the Sputnik 1, an artificial Earth satellite launched by the Soviet Union in 1957. 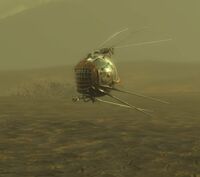 An eyebot in the Glowing Sea

The eyebot within Diamond City 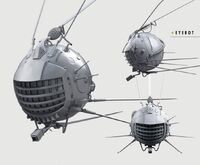