Enclave eyebots are a type of robot found in the Capital Wasteland in 2277.

One of the more elegant creations of RobCo Industries, the EyeBot is a hovering robot designed for a variety of purposes.[1] On the surface, it was designed for giving consumers instant access to radio and television on the go. It uses a sophisticated antenna array to deliver the latest news bulletins and presidential addresses (among other things) even in subterranean areas, like subways. However, it was also outfitted with advanced facial and auditory recognition technology, making it a useful tool for surveillance and security.[1] Although the design was compact and quite sophisticated, there was still room for expansion: The Enclave attempted to create a line of superior Duraframe EyeBots at Adams Air Force Base, but eventually scrapped the program, leaving one survivor.[2] The automated bases of Hopeville and Ashton later reproduced these robots in number, creating dedicated repair and medical variants, showcasing the potential still remaining in the humble EyeBot.[3]

Eyebots are spherical robots, slightly larger than a human head, with a large loudspeaker on the front, electrical zapper below it and several long antennas protruding from the top and back. They are used by the Enclave on the East Coast to broadcast propaganda, presidential speeches and patriotic marching music to the people of the Capital Wasteland in the form of a radio station operated by the Enclave.

Initially all eyebots are friendly, and will in fact attack enemies that engage the player or other wastelanders, making them a beneficial ally. However, once the player finishes the quest The Waters of Life, or engages them in combat, they may pose a threat; especially in the former case where they will turn hostile if any nearby Enclave patrols are under attack.

The eyebot is armed with a zapper, almost equal in strength to a laser pistol. It is extremely accurate with this weapon and will rarely miss, even over considerable distances. While not a very damaging opponent, the eyebot's mobility, small size and high accuracy can make it a threat if encountered by a low level player character. Fortunately, they are the most fragile robot in the game and are easily destroyed, even with bare fists. Eyebots don't seem to have a uniform level of strength, as some are killed by weak creatures like mole rats, while other pose a challenge to much stronger characters, such as raiders. When killed, an eyebot will explode, causing minor damage to anything nearby.

The normal eyebot encountered in the wastes is hardly a threat, except to very low level players: they have a weapon similar to the AEP7 laser pistol, and the least health of all the robots in the game.

Eyebots can be easily identified at a distance, as they emit a small buzzing sound from flying and constantly broadcast Enclave Radio, which consists of patriotic songs and John Henry Eden's speeches.

Eyebots bear a resemblance to the Soviet-era satellite Sputnik 1. 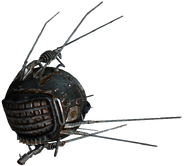 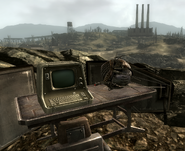 Deactivated eyebot
Add an image to this gallery

Retrieved from "https://fallout.fandom.com/wiki/Eyebot_(Fallout_3)?oldid=3343955"
Community content is available under CC-BY-SA unless otherwise noted.