Fallout: New Vegas
Lonesome Road
“"RobCo's always had an eye for robotics, and this little fellow is no different! This robotic marvel can not only recognize your face and voice with advanced facial and auditory recognition technology, it can also broadcast video and audio as well! Think of it - all the sights and sounds of your radio and TV in your living room at home blasted directly at you on the street, subway, bathroom, or wherever you may be! Never fear, you'll never miss a news bulletin or presidential address again, no matter where you are! Exhibit Brought to You By Your Friends at RobCo"”— Museum sign at the REPCONN headquarters

The eyebot is a type of robot encountered in the Mojave Wasteland and in the Divide in 2281.

Eyebots are aerial, spherical robots with a loudspeaker and electrical zapper on the front and several long antennas protruding from its top and back.

Eyebots are often friendly to the player and will aid them against enemies, however they have very low health. They are armed with a zapper, and will rarely miss, even over considerable distances. While not a very damaging opponent, the eyebot's mobility, small size, and high accuracy can make it a threat if encountered at low levels. When destroyed, eyebots will explode, causing minor damage to anything nearby. They cannot be looted.

The standard variant of the eyebot.

Medical eyebots appear in the final confrontation with Ulysses, and will consistently heal the damage dealt to him by either the Courier or the Marked men. After being destroyed, they will continually re-spawn unless the Courier manually shuts them off. Ulysses also mentions these were the machines responsible for his survival following the Divide's destruction, mistaking him for a member of the United States Armed Forces due to his duster.

Repair eyebots appear in several nuclear silos spread out across the Divide, maintaining everything that needs to be repaired before eventual launches. After being destroyed, they will continually respawn unless the Courier manually shuts them off.

This cut content eyebot (form id 0010470a) was intended to be a sentry alarm, within the Sunset Sarsaparilla factory and warehouse.

Eyebots appear in Fallout: New Vegas and its add-ons Lonesome Road and Old World Blues, as well as in the graphic novel All Roads. 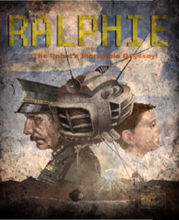 The poster found in the Sink of the eyebot named RALPHIE
Community content is available under CC-BY-SA unless otherwise noted.
Advertisement