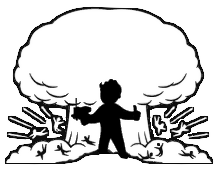 Explosive ammunition is a type of ammunition that explodes upon impact, transforming chemical potential energy into explosive kinetic energy.

In Fallout and Fallout 2, the only types of explosive ammunition are the explosive rocket and the rocket AP.

Explosives are almost always more powerful the closer a target is to the center of its blast radius in Fallout 3. This blast radius is known as the Area of Effect, or AoE.

Examples of explosive ammunition are the missiles that are used by the missile launcher and derivatives, and the mini nuke shell for the Fat Man catapult.

Fallout: New Vegas has significant numbers of explosive ammo, such as:

Explosive weapons in Fallout 4 include:

Retrieved from "https://fallout.fandom.com/wiki/Explosive?oldid=3299502"
Community content is available under CC-BY-SA unless otherwise noted.