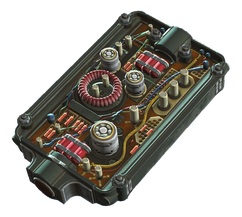 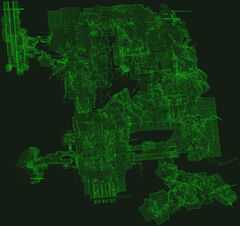 Locations of the four control boards on the map

Explore Vault 88 is a quest in the Fallout 4 add-on Vault-Tec Workshop.

To locate and activate each of the workshops in the remaining three sections of the vault, the Sole Survivor must find the corresponding Vault-Tec control board. The sections are comprised of the north sector, the north-east sector and the east sector.

The northern sectors are accessed by using the workshop to clear a massive rockfall, revealing a passage beyond with a stairwell. Down the stairs, partial construction can be seen of vault corridors. There are several mole rats here. Following the passage to the right will lead up a small tunnel to a stairwell filled with feral ghouls.

The north-east control board is in a room behind the first stairwell. Heading through the hole in the wall opposite the doorway (going further up the next set of stairs leads to a barricade that requires the workshop to clear) leads to a ledge, below which is another open chamber with the north-east workshop on the left. On the right is a passage that leads to the north workshop.

Heading downhill from the north workshop is a subway station with more ghouls residing within. The north control board is located on a cabinet in the right-hand platform room.

The eastern wall at the main chamber has two tunnels, one of which is blocked by impassable debris. The one on the right has a rockfall which can be cleared via workshop, revealing a tunnel beyond. Heading straight and going through the doorway on the right gives opens into a room containing three feral ghouls and the control board. Further down the tunnel will be a large chamber with a leveled mirelurk contain within. Upon entering the chamber, another leveled mirelurk and a leveled mirelurk hunter will emerge and attack. Once they are dead, a mirelurk queen will appear from the water at the far end of the room. With the mirelurks cleared, one will then have easy access to the east sector workshop which connects its path up to the main workshop, also including a massive water pump that provides 100 water to the vault once powered.

Once each workshop is up and running, the quest will complete, and one will be able to explore and expand Vault 88 further using the workshops to clear their way.

Retrieved from "https://fallout.fandom.com/wiki/Explore_Vault_88?oldid=3422873"
Community content is available under CC-BY-SA unless otherwise noted.
... more about "Explore Vault 88"
RDF feed
Has platform
PC +  and Playstation 4 +