The exploding scientist truck is an unmarked location in the Capital Wasteland. It is located west of broadcast tower KB5.

This location consists of a wrecked truck on a bridge. The truck itself is located above a minor mirelurk nest with numerous mirelurks surrounding it. To the north and east respectively, the overlook raider shack and the raider wreckage fortifications can be found. If the truck is approached, an explosion will be heard and one may see the accompanying remains of the scientist.

Inside the truck, a small living space with a table, a chair, and a mattress can be found. When entering the truck, on the left, a larger table can be found with a laser rifle, some ammo, a few components for the workbench and a few stimpaks. On the right, there are two racks surrounding a little table. On top of the table, a mini nuke can be found, while the racks contain some foodstuffs and extra components. Items may be displaced by the explosion.

The exploding scientist truck only appears in Fallout 3. 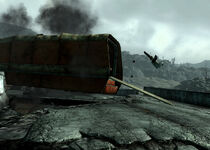 Scientist blown out of the truck

Laser rifle among other minor loot

Mirelurk nest under the bridge

Duck and Cover!
Add an image to this gallery
Retrieved from "https://fallout.fandom.com/wiki/Exploding_scientist_truck?oldid=3203481"
Community content is available under CC-BY-SA unless otherwise noted.