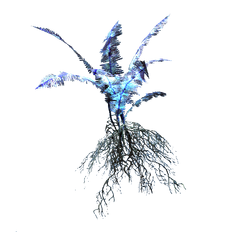 The experimental plant is a unique consumable item in Fallout 4.

The basis of this experimental plant was a root found by a Brotherhood field scribe at the mouth of a river, and displayed unique chemical properties, prompting the scribe to graft it onto a hardier stock for further testing and hybridization.[1]

The result was a leafy plant with thick roots, and after being determined safe to ingest, it was brewed into "an oddly good tea." Soon after, other samples of the plant began to exhibit a form of bioluminescence. The scribe deduced that the leaf must have restorative properties due to how healthy they felt, but other scribes suggested that the tea should no longer be brewed and that the plant is addictive in nature.[1]

The plant is a purple bioluminescent article with thick roots. It has been named "Glowleaf" by one of the senior scribes aboard the Prydwen. They were using it to make tea and wound up becoming addicted to the substance. After the addiction began to make them agitated with their fellow scribes, the project was terminated and the scribe was reassigned.

The plant's appearance, characteristics, and preference to grow near water are virtually identical to the nirnroot from the Elder Scrolls series, another game series produced by Bethesda Game Studios.

A fan theory positing that the Elder Scrolls universe and the Fallout universe are actually the same uses the experimental plant's similarity to the nirnroot as evidence of the connection. Pete Hines commented on this theory when asked about it during a Gamespot interview for Fallout 4 VR at E3 2017.

“I haven't the foggiest of notions how anybody could make the leap that they are in fact part of the same thing. We made Elder Scrolls, and a completely different developer and publisher came up with Fallout, which we then acquired. [...] I don't think there's any universe in which those universes are in the same universe. That's not a thing.”— Pete Hines, Gamespot interview

Plant location on the Island

Using clipping commands, the planter can be clearly viewed
Add a photo to this gallery

Retrieved from "https://fallout.fandom.com/wiki/Experimental_plant?oldid=3465606"
Community content is available under CC-BY-SA unless otherwise noted.