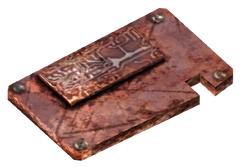 The experimental Rho ID (or R76-H3-0 chip, Rho chip) is a chip card worn by Enclave officers deployed to the Camp RHO experiment.

The Rho chip sends out a short range signal that will allow the wearer to freely wander the particular (and only this) camp under the protection of the provided armaments (Mark VI turrets). The defense systems will only recognize the person in possession of the RHO Chip, and thus will attack every enemy of the Enclave. Camp RHO is located southwest of Canterbury Commons and northwest of Vault 108.

While wearing the ID, the turrets will become friendly to the Lone Wanderer and any permanent companion (not tested with temporary companions) and fire upon any threats that are within range. They will not fire upon Enclave personnel nor eyebots. Reverse pickpocketing these cards onto caravan merchants, and caravan guards will not protect them from the turrets.

Retrieved from "https://fallout.fandom.com/wiki/Experimental_Rho_ID?oldid=3145042"
Community content is available under CC-BY-SA unless otherwise noted.