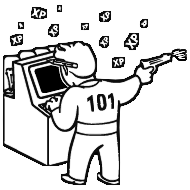 XP in Fallout is a conventional type similar to Dungeons and Dragons where levels are separated by a large amount of experience. For example, it takes 1,000 XP to reach level 2, 3,000 for level 3, 6,000 for level 4, and so on.

Fallout 2's XP system is similar to Fallout's. The only major difference is that leveling requires more XP than in Fallout.

The additional experience from fights on Very Hard compared to Very Easy is somewhat compensated by the enemies being much tougher. In the end, the player's skills and play style determine which difficulty setting allows for optimal leveling.

XP caps at level 20 on all difficulties without the Broken Steel add-on, which increases the cap to level 30.

Fallout: New Vegas does not reward XP based on the level of difficulty selected, despite the manual (PC and X360 version) stating otherwise. This somewhat alleviates the stress encountered while playing the game simultaneously on Hardcore, as it is not necessary to play it on Very Hard.

Unlike Fallout 3, Fallout: New Vegas awards XP for kills made by followers. This increases the usefulness of followers and significantly reduces the hassle of having to compete with them for XP.

The higher the Sole Survivor's Intelligence, the more experience points they earn.

The Idiot Savant perk offers significant XP increases, increasing the XP gained from any action by 3x or 5x depending on the perk rank. The higher the Intelligence, the lower the chance of activating the perk.

Similar to Fallout: New Vegas, Fallout 4 also awards experience points for kills made by a follower. However, the player character must damage the target for at least 25% of its Hit Points before the follower makes the kill in order for the experience points to count. XP is also awarded for enemies that kill each other within sight of the player character. In Survival mode, enemies that are killed by the Sole Survivor yield twice as much experience. This is the first time since Fallout 3 where a higher difficulty means more experience gain.

Outside of increasing Intelligence, there are perks and consumables that increase the number of experience points the player character earns.

* The sleeping perks and Quiet Reflection do not stack with each other.

Experience points (XP) are gained from completing a wide variety of tasks, such as defeating enemies in combat, crafting items or completing quests. There are multiple ways to increase XP gain:

XP in Fallout Tactics are given to all party members, regardless of the number of members. The game does not feature difficulty modifiers; however the Tough Guy game mode can provide 100% XP bonus (30% in versions prior to 1.27).

Experience in Fallout Shelter exist on a per-dweller basis, rather than there being an experience total for the player.

There are various methods of yielding experience for dwellers: