Update 35
“This Expedition takes players to the irradiated ruins of Pittsburgh, now known far and wide as simply The Pitt. First introduced to players in Fallout 3, the devastated Pennsylvanian city has become dominated by mutated monstrosities and other threats. See what opportunities (and dangers) await in this new locale when this Expedition embarks for Fallout 76 in 2022!”— Fallout.bethesda.net (Archived)

Expeditions: The Pitt is the upcoming thirteenth major update for Fallout 76. It features the former city of Pittsburgh, Pennsylvania. It follows Test Your Metal and will be followed by Nuka-World on Tour.

After the Great War, the ruins of Pittsburgh became known as the Pitt. It is the site of a conflict between the industrious survivors known as the Union and the raider gang known as the Fanatics.

Meanwhile, former Vault Dwellers from Appalachia's Vault 76 head to the Whitespring Resort, discovering that a new generation of Responders have arrived and dedicated to take over and renovate the building. The Vault Dwellers learn that the Union is in trouble and visit its ruins via a helicopter to help out the survivors.

Overall, Expeditions are story driven, repeatable missions to various locations, starting with the Pitt in 2022. There will be new rewards. The Pitt will be accessed by a new hub in Whitespring. According to the roadmap update, there will be interactable NPCs with quests and dialogue trees. The Vault Dwellers communicate with Hex.

The development of the update was overseen by Jeff Gardiner, who also supervised the Fallout 3 add-on The Pitt.[1] Art director Jonathan Rush created storyboards and concept art for the update and its trailer, with environment artist Connor McCampbell contributing to the worldbuilding of the trailer's scene.[2]

This section is transcluded from Fallout 76 characters. To change it, please edit the transcluded page.

"Welcome to The Pitt"

Building in Pitt by Connor McCampbell 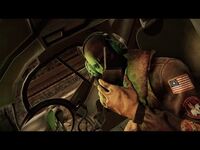 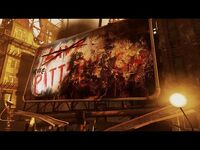