Expeditions is an upcoming PvE game mode for Fallout 76. The system takes players to explore and travel outside of Appalachia, and encounter NPCs and enemies along the way. 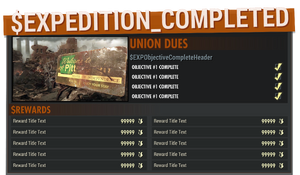 Overall, Expeditions are story driven, repeatable missions to various locations, starting with the Pitt in 2022. Expeditions offer new rewards, and are accessed via Vertibird at the Whitespring Refuge.

Each Expedition is split into several missions, each with their own playable zone.

Refuge daily quests are repeatable missions at the Whitespring Refuge. Completing them will allow the player character to power up the Vertibird with an Ultracite battery and actually start an Expedition.

Rewards are distributed by an after-mission report. The primary reward for Expeditions is the stamp currency. 1-10 stamps can be earned per completed Expedition, dependent on objectives completed.

According to Steve Massey, the next city after the Pitt will be a city never before seen in the series.[2]