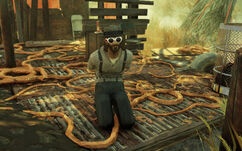 Ally: Exit Sage Left is an ally quest for Beckett in the Fallout 76 update Wastelanders.

After recovering Edwin's diary in the previous quest, Beckett now needs the Vault Dweller to rescue his friend Sage from his imprisonment at Blake's Offering, a Cult of the Mothman worship location near the border between The Mire and Cranberry Bog.

The quest's name is a play-on-words of the phrase "exit stage left", a theatrical direction for actors to quietly remove themselves from the stage.

Retrieved from "https://fallout.fandom.com/wiki/Exit_Sage_Left?oldid=3484942"
Community content is available under CC-BY-SA unless otherwise noted.