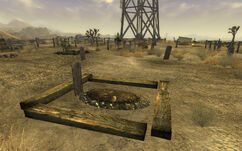 Exhumin' Nature[1] is an unmarked quest in Fallout: New Vegas.

There is loot to be found in the graveyard, namely a snow globe which can be handed in to Mr. House for 2000 caps as well as a couple of cigarette butts laying around the player's grave which will serve as evidence in incriminating Benny. The grave loot is randomly generated based on level, therefore the player character is not guaranteed to find anything of significant value other than the snow globe itself.

If By a Campfire on the Trail has been started, there are four bloatflies and a small bark scorpion around the cemetery. Otherwise the cemetery is uninhabited save for a raven.

The name of the quest is a play on the phrase "human nature" and the practice of removing a body from the ground, which is called exhumation.

Retrieved from "https://fallout.fandom.com/wiki/Exhumin%27_Nature?oldid=3173782"
Community content is available under CC-BY-SA unless otherwise noted.