“If the Sierra Madre assigned people to floors, she's got to have been sent to Vera's room, right? That's irony for you.”— Dean Domino

The executive suites is a location in the Sierra Madre Casino & Resort.

The executive suites are reached via elevator from the hotel lobby (the elevator is near the top of the curved stairs in the lobby). The floor is a linear maze of rooms, some of which are accessible only through holes that were blown through adjoining walls to other rooms, and is patrolled by three starlet security holograms. Aside from the security holograms, there are also several radios and some small patches of Cloud.

The floor has several rooms of note. A service room where hotel staff would have worked, with laundry machines, a workbench and crafting supplies, and two terminals on the desks over at the far side of the room from where the player character first comes in. Furthermore, there is also an ambitiously equipped room for hotel security, with a hunting shotgun, an automatic rifle, several suits of Sierra Madre armor in the lockers, and a closet full of various ammunition (the terminal on the desk unlocks the door to the closet). There is also a kitchen (presumably for room service) that has an electric hot plate for crafting.

A set of double doors along one of the hallways leads to the suite that Vera Keyes had occupied (the doors are unlocked). Inside, a door to the left opens to the bedroom (where Christine is). There is also a bar to the right that has some alcohol and a chemistry set which is capable of making several stimpaks, or a bundle of Psycho, Buffout, Mentats, Steady, and Rebound.

After learning some of Dean's history with Vera while dealing with him downstairs in The Tampico theater, the player character will learn more information about Vera herself through dialogue with Christine and records from the auto-doc. Vera's skeleton is sitting in a chair next to the bed, still dressed in her signature outfit. On the floor in front of her, there are several syringes of Med-X. Next to the bar is a door with a terminal. The terminal will unlock the door to a short hallway with several more dressers and an elevator.

In the hallway taken to Vera's room, a little further down the hall from Vera's suite, there is an intersection with another hallway and a skeleton lying on the floor next to a Sierra Madre helmet and a security keycard.

Three starlet holograms patrol the executive suites. A repair skill of 75 is required to disable each hologram's emitter, or the emitters can be destroyed by firing at them with a weapon. The emitters are found in the following locations:

Each emitter is concealed by an open door that covers the wall on which the emitter is located. The door must be closed before the emitter can be accessed.

The executive suites appear only in the Fallout: New Vegas add-on Dead Money. 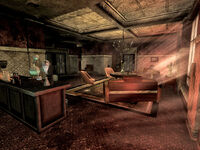 Sierra Madre Queen of Clubs
Add an image to this gallery
Retrieved from "https://fallout.fandom.com/wiki/Executive_suites?oldid=3116741"
Community content is available under CC-BY-SA unless otherwise noted.