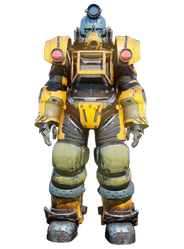 The EXC-17 Excavator suit,[1] commonly referred to as Excavator power armor, is a set of power armor in Fallout 76.

Developed by Garrahan Mining Co., the Excavator-class power armor was designed to protect miners from rockfalls and airborne contaminants while increasing the speed at which they could work. Despite being heavily advertised in Appalachia as the future of mining, the unit never entered full production[2] and only five suits were known to have been made.[1]

Created under the EX-17 Excavator Project, the armor's development was headed by Harold Frost, a service member for the United States Army Research Corps hired into the company by Vivian Garrahan in early 2075. The project made considerable progress at first, convincing Frost that he could potentially deliver a prototype within months.[3]

The suit soon ran into durability issues, with the arm units taking extra stress when mining bedrock, causing micro-stress fractures and sheared gear assemblies. By September 2075, the research team settled on using black titanium as an alternative material, being a strong ore native to Appalachia and having the necessary tensile strength to keep the arm components from damaging themselves. Although too expensive for the T-45 power armor due to the expense of the mining process, it was considered an acceptable choice for a corporate design.[4]

While using titanium solved the durability issues, the suit's extra weight made a more efficient reactor necessary. The team continued to experiment with new solutions as late as May 2076, but were already past specifications on the repurposed T-45 reactor, causing overheating and stability issues.[5]

The company eventually settled on developing an ultracite reactor, having the necessary power output and radiation signature for the project. In exchange for the patented ore's usage, Garrahan Mining Co. was required to make a decade-long commitment to Atomic Mining Services. After further experimentation and a near meltdown, the team managed to power the armor with the ore.[6] Pressured by AMS' reveal of Watoga and Hornwright Industrial Mining Company launching the auto-miner industrial robot line, the research team was forced to work around the clock for almost a month straight. By February 2077, the team was able to complete the project and unveil the suit to the press three months ahead of schedule.[7]

By April 3, three complete Excavator units were operational and proved the model to be a capable tool. A single suit operated by Bryce Garrahan was able to break the company's record for the amount of ore extracted in a single day, all without suffering maintenance issues. Much to the research team's surprise, Vivian challenged Hornwright Mining's auto-miners to a "man versus machine" ore-mining competition with the suits.[8] The challenge was a calculated risk, aiming to raise the profile of the company and the project while securing lucrative contracts in the increasingly automation-oriented Appalachia. Vivian was convinced the Excavator suits distinguished themselves with revolutionary mineral sensors and the "human drive" to win, despite uncertainty from a majority of the company.[9][10]

The event started on October 18, lasting the next 24 hours.[11] Due to interference from Hornwright's vice president, Dutch Wharton,[9] the auto-miners won by a margin of 1.85 tons (less than a single truckload) and were declared winners by the media. Hornwright capitalized on this tenuous victory and claimed it as an example of machine's superiority to man.[12]

Hornwright Industry's Auto-miners quickly became popular in Appalachia as the "talk of the region." Meanwhile, Garrahan's stock price drastically declined, allowing for a hostile takeover by Hornwright. Although Penelope Hornwright saw the Excavator armor as a "black titanium coffin," the company planned to apply the suit's mineral detection technology to their own auto-miners.[9][13]

The Great War ended the company's ambitions, leaving the Excavator Power Armor for various wasteland factions to recover,[9] namely the Responders' Fire Breathers unit[14] and the Vault Dwellers of Vault 76.

Led by a member of the T-45 development team, Harold Frost,[4] the Excavator armor borrowed elements of the T-45 power armor, such as repurposing the model's reactor.[5] The suit's parts were cast in black titanium to increase durability, as the extra punishment the arm units took when mining bedrock caused damage to the suit. The increased weight from the titanium caused overheating and stability issues with the suit's T-45 reactor.[5] To develop a more efficient power source, Atomic Mining Services were contracted to obtain their patented ultracite ore for use in an ultracite-based reactor.[6]

Registering the helmet is required to complete the Miner Miracles quest but has no effect on the use of the power armor or its special property: If the Excavator armor torso is worn, mining will produce four times the ore. The bonus is applied to the output and doesn't affect the number of times a vein can be mined, effectively quadrupling the output almost across the board.

The torso's bonus affects ore veins listed to the right. Ore deposits are not affected.

In addition to the raw materials, crafting power armor segments requires a power armor chassis affixed to a power armor station. The plans to craft each part are automatically learned during Miner Miracles.

The list does not include cosmetic transformations, which are covered separately.

An advertising poster in front of the Rusty Pick promoting the Excavator power armor.

Model by Ben Carnow
Add a photo to this gallery

Retrieved from "https://fallout.fandom.com/wiki/Excavator_power_armor?oldid=3490855"
Community content is available under CC-BY-SA unless otherwise noted.