Point Lookout
“I've no doubt Bysshe will want to set up shop here and drill their little hearts out.”— Caroline Saunders, on soil survey tape #3

The excavated muck holes are unmarked locations in the Fallout 3 add-on Point Lookout, found one block east and slightly north of the Lil' Tyke Playhouse. They are part of the An Antique Land side quest.

The excavated muck holes are the result of a Bysshe Company pre-War research team surveying bio-gas. The muck holes are heavily irradiated, abandoned, contain gas pockets, and contain the soil sample holotapes. If the player character uses flame-based weapons, merely stepping into a pocket of gas while equipped with the flamer, Shishkebab, or various other flame weapons with it drawn will cause the gas to ignite, setting them on fire. Likewise, drawing such a weapon while standing in gas will also cause it to ignite.

“Sample set one shows promising concentration of bio-gas in mostly limestone substratum of wetlands. No exact levels yet, but this site should exhibit more than enough extraction potential to meet survey goals.”— Caroline Saunders

This excavated muck hole is north of the trash heap. Inside there is a desk with a few items on it, such as:

“We've also discovered heavy lye residue in a naturally-formed chamber at this excavation site. Lucky we were wearing caustics gear to begin with, or somebody might have suffered some serious chemical burns.”— Caroline Saunders

This excavated muck hole is one block east and slightly north of the Lil' Tyke Playhouse. Inside there is:

“What in the world have we tapped into? Sample Site Three is showing bio-gas concentration off the charts!”— Caroline Saunders

This excavated muck hole is northwest of the jet crash site. Inside there is:

The excavated muck holes appear only in the Fallout 3 add-on Point Lookout. 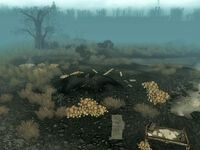 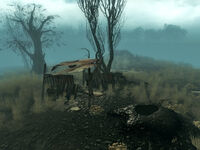 The muck hole near the jet crash site

Tape #2 in the muck hole east of Lil' Tyke Playhouse

Tape #3 in the muck hole west of the jet crash site
Deutsch Русский
Community content is available under CC-BY-SA unless otherwise noted.
Advertisement