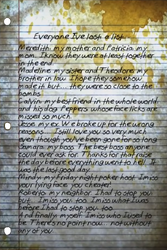 Everyone is a paper note in Fallout 76.

The note can be found in stash M-3 in Morgantown in the remains of the bank, next to a dead Responder on the desk. The door to the stash can only be opened during Back on the Beat and for a short time after before the door relocks.

Meredith, my mother and Patricia, my mom. I know they were at least together in the end.
Madline, my sister and Theodore, my brother in law. I hope they somehow made it, but... they were so close to the bombs
Calvin, my best friend in the whole world, and his dog, Peppers whose face licks are missed so much.
Jesse, my ex. We broke up for the wrong reasons. I still love you so very much even though you've been gone for so long.
Samara, my boss. The best boss anyone could ever ask for. Thanks for that raise the day everything went to hell. It was the last good day.
Mindy, my Friday night poker host. I miss your lying face, you cheater!
Roberto, my neighbor. I had to stop you but... I miss you, too. I miss what I was before I had to stop you, too.
And finally, myself. I miss who I used to be. There's no point now... not without any of you.

Retrieved from "https://fallout.fandom.com/wiki/Everyone?oldid=3097129"
Community content is available under CC-BY-SA unless otherwise noted.