Fallout 3
“There have been more and more sightings of Raiders over by Evergreen Mills. Smart money's on them having some kind of camp out that way.”— Three Dog

Evergreen Mills is an old factory in the southwest quadrant of the Capital Wasteland in 2277, just east of Smith Casey's garage. It is inhabited by a large number of raiders, a few captive slaves, and one of the few super mutant behemoths. Deep in the mill is Smiling Jack, a merchant who will sell to the Lone Wanderer even if they have killed the other inhabitants.

Evergreen Mills features a large outdoor area that is nestled in a small valley. Other than by dropping down from the valley's ledges, it can only be reached by following a set of train tracks that enter the valley from the east. The exterior area consists of a slave pen with three to four slaves, an electrified cage containing a super mutant behemoth, and a series of metal shacks and train cars surrounding the factory building itself. In total, up to 16 raiders patrol the area and guard the rails leading into the camp. The area contains a number of traps, including frag mines near the northern entrance, with tripwires (releasing grenade bouquets) at the shack's periphery.

This shack is found just north of the factory building. It is home to a male and female raider. They run down from upstairs, where a discarded set of raider armor can be found on the nightstand. The shack contains some minor loot. There is also a workbench in the back room, with a bottlecap mine under it.

The southern shack with a copy of U.S. Army: 30 Handy Flamethrower Recipes is a single-floor, two-room structure in the southern part of the valley and is home to a single raider armed with a flamer. A missile launcher can be found on the bed in the room adjacent to the entry area if the raider does not pick it up to use it.

The foundry is the interior of the large factory building, guarded by six raiders. Upon entering, a door to the east leads to the Evergreen Mills bazaar. On the ground level, there are two cabins occupied by enemies, one of which holds a safe, a gun cabinet, and a Nuka-Cola vending machine. A flight of stairs behind the entrance provides access to a few walkways and rooms. Two rooms on the highest level contain safes. One of these rooms also contains other loot (chems and a Fat Man) and has a locked door that can be opened with the storage room key found in another room on the topmost level.

There is an Easy locked safe as well as two mine boxes and an ammunition box behind the bar on the lower level near the door to the Bazaar. There is also a copy of Duck and Cover! lying next to a dead body on the ledge above the broken terminal of the ground. To reach it, one must jump off the stairs to the ledge. 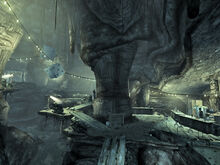 The Evergreen Mills bazaar is a cave complex with a bar and shop accessed through a hole in the floor. Apart from the non-hostile Smiling Jack, 10 heavily armed raiders, with at least one carrying a missile launcher, populate the area.

Just inside the door leading from the foundry is a room with most of the floor collapsed. It is possible to climb down this hole and follow a tunnel to the main portion of the bazaar. Arranged around a central pillar are wooden platforms connected by a series of ramps. A passage in the northwest corner of this central area, flanked by a pair of mannequins decorated with red lights, leads up to a raider brothel where the player character will be attacked by Madame. A few raider women are locked in cells. If released, these women will attack the player character.

On the right-hand side of the cave is the shop of Smiling Jack (the only non-hostile raider in the area), which is in a small cave reached from the main portion of the bazaar. There is a workbench in the northeast alcove of his store. A small safe is built into the back of the counter under the workbench. Behind the workbench are some shelves containing some miscellaneous items and the Bobblehead - Barter on the right.

There is a hidden space behind the shelves on the right (when the player walks in) containing two ammunition boxes and some chems. To get there, just turn right and go between the two sets of shelves. Smiling Jack has a unique weapon, the Terrible Shotgun, in his possession, along with a key that unlocks his inventory container. 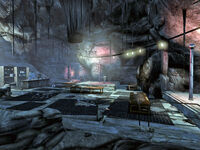 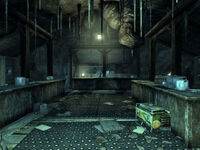 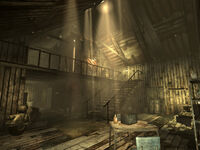 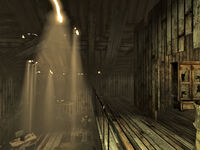 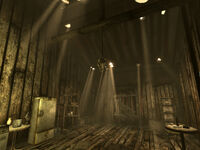 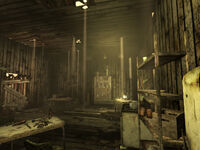 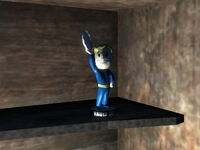 Nikola Tesla and You in the bazaar's prison cell

Bottlecap mine in the bazaar

Bottlecap mine in the shack

Dice hanging from the ceiling