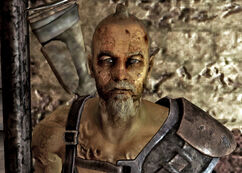 “This thing's mauled trogs and ghouls from here to Monroeville.”

Everett is a Pitt raider, usually found in The Mill in the year 2277.

Sleazy and prone to bouts of psychotic behavior, Everett enjoys leading Pitt slaves to their doom, running the ingot-collection officers near the abandoned area between the Mill and the steelyard. He's an equipment hoarder and collector, and he barters for any found ingots.[1]

Everett appears only in The Pitt add-on for Fallout 3.

Retrieved from "https://fallout.fandom.com/wiki/Everett?oldid=3102218"
Community content is available under CC-BY-SA unless otherwise noted.
... more about "Everett"
RDF feed
Has platform
Playstation 3 +  and PC +