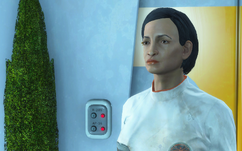 Eve is a third generation synth living in the Institute in 2287.

Eve is the subject of a social experiment performed by Dr. Alan Binet, who wants to see if a synth can integrate into a human family.[1] As such, Eve acts as a surrogate mother to Alan's son, Liam Binet, although she is aware that she can never replace his biological mother.[2] Eve's role within the experiment has changed since its implementation, and she even displays characteristics in line with a relationship with Alan, acting as his surrogate wife.[3] This connection has been noticed by others outside the experiment as well.[1]

Although she is a synth, she does not drop a synth component upon death.

Eve appears only in Fallout 4.

Eve in Binet's room
Add an image to this gallery

Retrieved from "https://fallout.fandom.com/wiki/Eve?oldid=3338325"
Community content is available under CC-BY-SA unless otherwise noted.