NPCM_GovernorEvans
“And I want to say the future of Appalachia is going to be even brighter as we bring in a new age of automation.”— Graduation ceremony

Governor Evans was the governor of the Appalachian Territories[1] before the Great War.

Evans' support for the armed forces through technological advancement[2] led to him receiving a letter of thanks from the Office of the President.[3]

Evans also enjoyed a mutually beneficial relationship with Hornwright Industrial; the company supported him with monetary and political backing, and in exchange, he protected the company from any harm and supported their automation agenda through Ballot Measure 6 and ensuring access to key contracts.[4] However, he failed to keep his promise in the wake of the automation riots, causing Penelope Hornwright to threaten reallocating their funds,[5] in turn leading to Evans mobilizing the National Guard.[6]

He went missing after the Great War, neglecting or unable to turn over Executive Authority, which left the Appalachian governance unorganized.[7] The original Responders were hesitant to follow orders and the Provisional Council had no confirmed leadership, contributing to the panic.[7] He is also mentioned by the Warden of Eastern Regional Penitentiary, fearing he may slash the prison budget.[8]

Evans is mentioned only in Fallout 76. 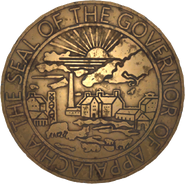 Seal of the governor 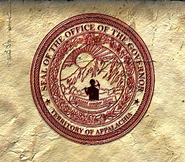 Office of the governor seal