Evan King's house is the largest of the four homes in Arefu.

It is a small two-level home. The second floor contains some ammunition boxes, metal boxes, and other random loot. It is a two-level building, with the main room being two stories high due to a balcony.

The Repair Bobblehead is on the table to the left of the door.

Evan King does not have a key to his house, so gaining entrance is impossible if the player character's Lockpick skill is under 50. One can pick Evan King's lock without a Karma penalty, even though it is considered trespassing and he may attack. 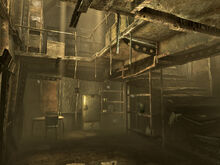 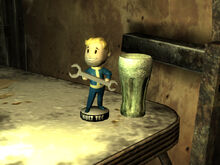