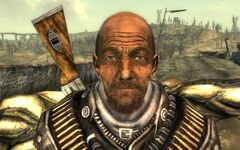 Evan King without his hat

“The shit's about to hit the fan in this cesspool, and I don't think I can stop them.”

Evan King is a resident of the town of Arefu and is the lone defender of the town in the year 2277.

Evan King was born in 2222. He has lived on this island all of his 55 years. He's watched the settlement shrink from 30 people down to its current population of merely 5. He is still responsible for the small settlement and is very careful whenever a stranger enters his domain. He is quite experienced in combat, having repelled attacks by raiders, slavers, and various creatures. To maintain Arefu's security, he had the northern bridge span destroyed and feels safer having to monitor only the southern approach.[1]

Evan King appears only in Fallout 3.

Retrieved from "https://fallout.fandom.com/wiki/Evan_King?oldid=3431322"
Community content is available under CC-BY-SA unless otherwise noted.