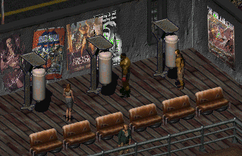 Evan outside the ring 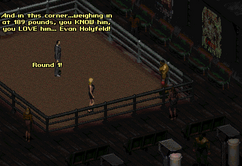 “Mike bite my ears cause he hungry”

Evan Holyfeld is a boxer fighting in the Jungle Gym in 2241.

A squat black man with a thick square jaw[1], Evan's ears were horribly savaged by the Masticator, with whom he butted heads and ended up losing his precious ears. He is the penultimate fight in the New Reno Championship, after whom the Chosen One faces off against the meanest fighter Reno has to offer.

Become a Prizefighter: He is the third opponent in the ring. A competent fighter.

He will be replaced by Mark "Steel" Torrance if Evan is killed before starting Become a Prizefighter when talking to Stuart Little.

Evan Holyfeld appears only in Fallout 2.

Evan Holyfeld is a reference to boxer Evander Holyfield. His fight with "The Masticator", based on Mike Tyson, in which Evan loses his ear is a nod towards the infamous fight between Tyson and Holyfield where Tyson bit off Holyfield's ear.

Retrieved from "https://fallout.fandom.com/wiki/Evan_Holyfeld?oldid=3341717"
Community content is available under CC-BY-SA unless otherwise noted.