9 to 5
“I guess you could say that I like the peace and quiet, and the view... well, look for yourself. It's something else.”— Evan

Evan is a man living outside of Nuka-World in 2287.

Little is known of Evan's past, only that he calls the outskirts of Nuka-World his home. Evan is a friendly person to encounter in the wasteland. He is open and helpful - though it seems any form of kindness in Nuka-World is suspect. Evan lives on his own in a trailer on the outskirts of the park, viewing Nuka-World safely from a distance.

If spoken to, Evan will gift the Sole Survivor with the Nuka-Love recipe book, and also offer the Sole Survivor whatever he has lying around. Some of his harvestable items such as melons cannot be taken without it being considered stealing, although stealing his crops will not turn him hostile, nor provoke any negative dialogue.

Evan cannot be injured or killed. Attempting to do so will not garner a response.

Evan appears only in the Fallout 4 add-on Nuka-World.

Evan is a tribute to Reddit user NoohjXLVII's brother Evan, who passed away before Bethesda Softworks could deliver a care package of Fallout merchandise, which was sent as a way of supporting the two brothers after their father had died. To make up for the delayed package, Bethesda promised to include Evan as an NPC in Nuka-World.[1][2][3][4] 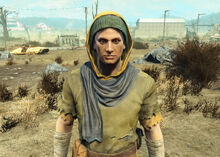