Evan was a pre-War resident of Appalachia who has become infected with the Scorched plague. Evan was the fiancé of the Vault 76 overseer.[1]

His former home was located in the town of Welch, where the overseer's fifth journal entry is discovered. Evan was a classmate of the overseer at Morgantown High School, although he graduated a year ahead of her and went straight to work at the mine. Her mother introduced Evan to her. A few months later, her mother died in a mining accident. She would spend a lot of time in the library to help cope with her grief. Evan would appear every day at the library with lunch for them to share. Afterwards, when she was accepted into the Vault-Tec Corporation, Evan proposed and she accepted.

Before the Great War, he signed up with Vault-Tec to become a resident of Vault 76. With Vault 76 being a control vault, serving only to protect the most prominent and bright members of the pre-War community, Evan's application was denied. When Evan found out about the Societal Preservation Program from his fiancée, he implored her to tell the press but she did not because she found herself agreeing with the intent. Due to not being a Vault resident, Even was forced to stay outside, where he would later become infected by the Scorched plague.

Two and a half decades after the nuclear fallout, the Vault 76 overseer found him inside a building near the top of Mount Blair. She expresses great grief on encountering Evan in his infected form. She holds herself personally responsible for Evan's demise. However, she says she still agrees with Vault-Tec's policy to preserve only the most capable humans, claiming that this is necessary to effectively rebuild society.[2] In her sixth journal entry she states that she's unable to kill Evan "for a second time." Instead, she left a holotape and asked one of her Vault Dwellers to please put him out of his misery for her.[3]

Evan appears only in Fallout 76. 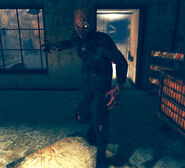