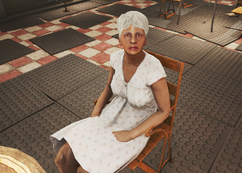 Eustace Hawthorne is a woman living in the upper stands of Diamond City in 2287.

A respected matriarch, Eustace is the grandmother of Hawthorne. She can often be found in front of the Colonial Taphouse sharing a table with Malcom Latimer. Unlike other upper stand residents, Eustace is much more polite and kind to the Sole Survivor than other resident's of the upper stands. She is a cat lover, having 25 cats in her house and multiple cat pictures.

Eustace Hawthorne appears only in Fallout 4.

Eustace in her home

Retrieved from "https://fallout.fandom.com/wiki/Eustace_Hawthorne?oldid=3387654"
Community content is available under CC-BY-SA unless otherwise noted.