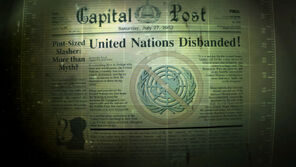 Stalemate
Dissolution of the European Commonwealth

The Euro-Middle Eastern War was a military conflict that is considered the beginning of the Resource Wars.

The war was a result of Europe's dependence on oil imported from the Middle East. Price hikes made by Middle Eastern exporters led to hostility and then war, following the United States invasion of Mexico in 2051, which had a similar goal of securing exports of oil from Mexico to the United States.[Non-game 1] The war began in April 2052, immediately causing oil prices to skyrocket and forcing many smaller nations into bankruptcy.[Non-game 2] Already beleaguered due to a deteriorating international situation, the UN tried keeping the situation contained. However, between May and July, a string of heated debates caused nations to withdraw from the UN, leading to its disbandment in July, three months after the Commonwealth invaded the Middle East.[Non-game 3]

The major casualty of the war was the United Nations, which disbanded on July 27, 2052.[1] The European Commonwealth subsequently dissolved into bickering, quarreling nation-states fighting over the world's remaining resources.[2] The conflict would only escalate. In December 2053, Tel Aviv was wiped out by a terrorist nuclear weapon.[Non-game 4] In January 2054, limited nuclear exchanges took place across the Middle East, starting a nuclear scare worldwide.[Non-game 5]

In 2054, the war had become so widely known and feared that it managed to scare the United States into setting Project Safehouse in motion. The project, financed by junk bonds, was designed to create shelters, called vaults, for the populace in the event of a nuclear war or deadly plague.[Non-game 6][Non-game 7][Non-game 8] The conflict would only stop in 2060 when the oil fields in the Middle East ran dry.[Non-game 9] Both the European Commonwealth and the Middle Eastern powers were reduced to ruin with no victor.

Retrieved from "https://fallout.fandom.com/wiki/European_Commonwealth-Middle_East_War?oldid=3493630"
Community content is available under CC-BY-SA unless otherwise noted.