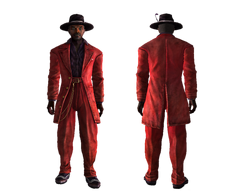 The suit is a red pre-War zoot suit. It gives a +1 bonus to Charisma and adds 2 to the Small Guns skill. The hat also gives a +1 increase in Charisma, in addition to having a long purple feather. They're both only repairable by merchants.

The hat can be found on the projector table in Eulogy's pad in Paradise Falls. It can be difficult to spot due to the low light level in the room, unless one uses their Pip-Boy light. The suit can be obtained by killing or reverse-pickpocketing Eulogy Jones.

The hat can be obtained from Rotface, who sits against a destroyed building next to Mick & Ralph's just past Freeside's east gate. The most reliable method of obtaining the hat seems to be paying for exactly 11 tips, waiting outside the east gate in the Mojave Wasteland, then re-entering Freeside whereupon he should be wearing the hat. The hat can be obtained by killing or reverse-pickpocketing Rotface - killing Rotface does not cause a drop in Karma nor will it cause Freeside infamy or hostility from the local residents.

Retrieved from "https://fallout.fandom.com/wiki/Eulogy_Jones%27_suit?oldid=3052202"
Community content is available under CC-BY-SA unless otherwise noted.