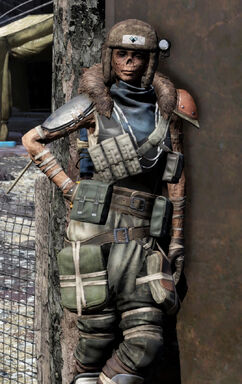 Eugenie is a client of the Blue Ridge Caravan Company at Big Bend Tunnel in 2103.

Eugenie is an arms and ammunition merchant leading brahmin through Big Bend Tunnel during the event Riding Shotgun. She is knowledgeable about making the journey through the tunnel and takes command when threatened. She expresses her disdain for Blood Eagles, providing tips on how to handle them.[1]

Eugenie mentions coming from a compound where she spent a decade, "hiding from people that would kill us on sight just for being who we are" before she began running a caravan with the Blue Ridge Caravan Company.[2][3] She is friendly and talkative with the other caravan guards, and makes comments about her past, mentioning her family and their military background.[4]

Eugenie appears only in the Fallout 76 update Wastelanders.

Retrieved from "https://fallout.fandom.com/wiki/Eugenie?oldid=3468337"
Community content is available under CC-BY-SA unless otherwise noted.