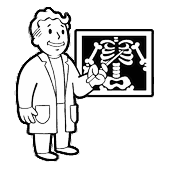 The terminology behind those regarded as pure humans first originated from the Master in Fallout and has been mentioned throughout the following Fallout titles.

Used in a broader sense to term those humans with a low to relatively radiation-free state, being a pure human is more properly attributed to those who are affected by the FEV in the way intended from before the Great War.[1] Should a human undergo a unique mutation such as the Master or Lieutenant, or if one undergoes proper evolutionary stages into a super mutant by exhibiting an expanded intelligence, as well as strength and size, determine whether a human is truly pure or not.[2] However while being termed a pure human is indeed a distinguishable trait from other normal or sub-normal humans, being a pure human does not exhibit signs of being an entirely different species, nor does it mandate being a superior or inferior race. This is seen by pure humans and normal humans being allowed to breed, as well as it is nearly impossible to tell the difference between being a normal and pure human outside of FEV research and experimentation.

After an expedition gone wrong while searching for the source of hostile mutants attacking nearby settlements, a man by the name of Richard Grey found himself stuck in one of the FEV vats for an extended amount of time after the others in his group with the exception of Harold were killed, and due to his being born in a vault and being relatively radiation-free, Grey underwent the most unique of FEV mutations, turning into the antagonist of the Vault Dweller most popularly known and referred to as "the Master."[3] As the Master began experimenting with FEV and using other humans to expand his biomass, the Master soon came to the conclusion that FEV could be used to evolve and unify humanity in order to save themselves. However, the Master hit an obstacle in that most humans were coming out as either dead or mentally handicapped super mutants that were of little use to his vision.

But then, the Master came across another pure human, which after absorbing into himself, made him realize that humans with little or no radiation conformed better to the effects of FEV. After biologically linking himself[4] to the Mariposa Military Base's supercomputer detailing FEV, this fact was confirmed and the Master began looking for sanctuaries of still pure humans. This proved to be fruitful in his endeavors, as those that were pure humans began making up the backbone of the Master's Unity, such as Lieutenant and the nightkin.[5]

After the defeat of the Master, pure humans once again became a meaningless label and was largely forgotten, even by the super mutants that had survived their annihilation after the destruction of the Cathedral. But after the events leading up to the Chosen One leaving Arroyo, a secretive political and military organization known as the Enclave began expanding their influence across New California, and were seen experimenting upon the effects of FEV, as well as formulating a plan to eradicate any and all "near-humans."[6][7]

Attempting and ultimately succeeding in the creation of an airborne strain of FEV that would wipe the world clean of most, if not all life, as a way for the Enclave to then take over and re-build America, a vaccine was also developed to inoculate against the virus.[8][9] These experiments also led to another pure human by the name of Frank Horrigan undergoing unique mutations due to FEV compatibility.[10][11]

While FEV played a lesser role in Fallout 3, pure humans are still referenced and play an integral part in the main questline. While most humans in the Capital Wasteland are too damaged by radiation to create anything but the dumbest variety of super mutants, President John Henry Eden was able to create an even further modified strain of FEV based off of Curling's research.[12] This version of the virus was modified to kill any human with more than the most minor of radiation exposure while keeping pure humans alive. If introduced into the Potomac River, the virus is seen living up to its purpose, killing any normal humans or mutants that drink the water.

With The Pitt, the baby Marie is shown to be a pure human and is entirely immune to any forms of radiation exposure. This radiation immunity can be passed on to others in the form of a booster shot.

The Sole Survivor is a prime human, and it is occasionally brought up in the story, such as when they enter Vault 81, with the doctor who screened them remarking how little radiation they have. When creating their first synths, the Institute was unable to create synths more advanced than generation two, which is largely mechanical in nature, as they needed "undamaged" human DNA - only obtainable from a prime human. Regardless of the secure and sanitary conditions within the Institute, the DNA the Institute scientists had was nevertheless impure. In order to get the DNA, the Institute infiltrated Vault 111 in 2227 and opened one of the cryostasis pods via manual override, taking Shaun, the Sole Survivor's infant son, and leaving them as a backup. The rest of the vault dwellers were killed due to life support failure caused by the override, leaving only Shaun and the Sole Survivor alive.

Pure humans are mentioned briefly on a console in Buena Vista, detailing the possibility of setting the Calculator's parameters to target mutants while leaving pure humans alone, which would help ensure the survival of the human species.[13]

A pure human turned super mutant by the name of Attis began further experimentation into FEV after the death of the Master, and discovered the Secret Vault, which held a unique variation of FEV that further evolved super mutants. For most super mutants, this included rapid cell regeneration and increased mass. But for pure humans turned into super mutants such as Attis, this variant of FEV resulted in multi-cellular beings of surprising mental capacity and aggression.

Pure, or pristine humans, are referenced multiple times throughout the Fallout film treatment. The first time is in Dekker's club when, in innuendo form, the film treatment describes how semi-mutated women want to get their hands on the protagonist's 'pristine bodily fluids.'[14]

The Master had also been testing genetic combinations for years, but all his previous attempts had resulted in sterile mutants. He believes that the protagonist, preliminarily named Hero, and his female companion represent his last chance to create fertile mutants, unless he can capture the people of Vault 13.[15] This all stems from the perceived purity of Vault Dwellers, though this is not expanded on in the same way as in the games.

Lou Tenant, while also seen using the pure human term, was more partial to using the "prime normal" label instead. This different terminology reflected the Lou Tenant's personal theory[16] that while radiation might have been a small factor in successful FEV evolution, that the real culprit behind lesser evolutions stemmed from the FEV vats leaking after the Chinese nuclear bombs hit the original West Tek research facility, which resulted in the region known as the Glow.

The impact of the nuclear shockwaves cracked open a few nutrient solution tanks filled with FEV, with the subsequent radiation mutating the FEV into an airborne strain of the original virus, with the new airborne strain of the FEV inoculating any person infected with it against the original, mutational strain of the FEV, acting as a form of a vaccine and giving exposed creatures some limited resistance to the FEV's mutational effects. However, this theory has not been proven and is directly contradicted by the Master's research notes, as well as by Joshua Sawyer.[17]

Unique mutations due to FEVEdit

Retrieved from "https://fallout.fandom.com/wiki/Etymology_of_pure_and_prime_humans?oldid=3342129"
Community content is available under CC-BY-SA unless otherwise noted.