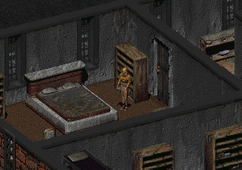 Ethyl Wright, the wife of Orville Wright, is the head of the New Reno Temperance Union in 2241.

A plump, rosy-cheeked woman in seemingly perpetually good spirits,[1] Ethyl is oblivious to the alcohol-oriented dealings of her husband and the whole Wright family. She believes that her husband has closed down the still, while, in fact, he has only relocated them. According to Reno tales, she is very fertile.

Bust up Wright's still: Ethyl hates her husband's alcohol production and wants the still bashed up.

Ethyl Wright is a very volatile personality, although not one given to violence. Rather, her emotions tend to run the gamut, with lauding preachiness and offense being her primary mode.

Like many other residents of large settlements in the wasteland, Ethyl looks down upon people she perceives as being "tribal." Regardless of how the Chosen One addresses her, Ethyl will always load her speech with what she feels are tribal words, her apparent favorite being "firewater."

Ethyl Wright is also vehemently opposed to alcohol in all its forms. She is the head of the New Reno Temperance Union, or so she claims. Given her husband's responses to the concept of the Union, the complete ignorance of the New Reno townsfolk to the Union and its objectives, and that the only other member of the Union is the inveterate drunkard Father Tully, the existence of the Union beyond the confines of Ethyl's head is questionable.

If the Chosen One lets it slip (or deliberately divulges) the source of her family's money, Ethyl predictably pitches a fit. She knows full well that her husband will not come through on a promise to stop producing alcohol; after all, he had made the promise before. Consequently, she will contract the Chosen to deal with the situation personally. To wit, she wants them to take a Louisville Slugger and destroy the Wright stills.

Doing so is neither particularly easy nor particularly bright. The Wrights working at the stills take great offense to someone destroying their family's livelihood and often attack. Defending oneself usually involves killing one of the Wright kids, which can easily upset the entire family.

Naturally, if already having achieved whatever objectives desired from the Wright family, such a block war may not necessarily be out of line with one's priorities. In this case, the best thing would be to mind the gunfire, lest one of the dozen or so Wright children be hit and give the reputation of a Childkiller.

However, it is possible and preferable to destroy the stills without violence. Using the Repair skill (or letting Vic do it if not having a good enough skill oneself), the stills can be broken beyond repair without the Wrights even noticing.

Ethyl Wright appears only in Fallout 2.

In chemistry, ethyl is the functional group of two saturated carbons bonded, the character name being a reference to ethyl alcohol, the same alcohol that is fermented in distilleries.

Retrieved from "https://fallout.fandom.com/wiki/Ethyl_Wright?oldid=3341714"
Community content is available under CC-BY-SA unless otherwise noted.