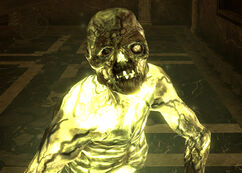 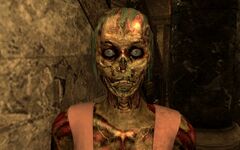 Ethyl is one of two glowing ones, the other one being Meat, in the Chop Shop's containment area in Underworld in 2277.

When he is not operating on ghouls with a variety of odd ailments, Dr. Barrows is closely studying a small collection of patients who have succumbed to the massive amounts of radiation, turned feral, and become glowing one subjects, such as Ethyl. Ethyl is housed in an inaccessible containment chamber adjacent to his Chop Shop surgery.[1]

She can be killed with a flamer as the fire goes right through the glass windows.

Ethyl appears only in Fallout 3.

The G.E.C.K. contains a non-feral ghoul version of her. This version is a member of the Underworld faction and is listed in the 'Underworld residents' list.

Ethyl, along with Meat, remains in the game files of Fallout: New Vegas.

Retrieved from "https://fallout.fandom.com/wiki/Ethyl?oldid=3223244"
Community content is available under CC-BY-SA unless otherwise noted.