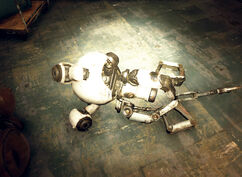 Estella is a deactivated Miss Nanny at Vault-Tec University in Appalachia in 2103.

A Mister Handy playing the role of an assistant to Doctor Loris, Estella rushed in to help Kelemen in the reactor wing. Sealed in with him, she used her supply of radiation drugs to keep him alive long enough to fix the reactor and save the vault - before perishing alongside him.

Estella appears only in Fallout 76, introduced in the Wastelanders update.

Retrieved from "https://fallout.fandom.com/wiki/Estella?oldid=3468419"
Community content is available under CC-BY-SA unless otherwise noted.