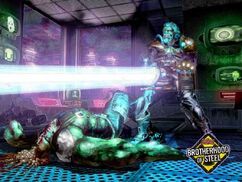 Escorting the Paladin is a quest in Fallout: Brotherhood of Steel.

In Los, Rhombus ends up being alone, captured, with all his comrades killed in a bloody battle with super mutants and a local ghoul cult known as the Church of the Lost, led by Blake. He managed to steal a keycard of the Secret Vault, the final destination of the Attis Army and hid it under a truck. Rhombus assists the Initiate to the truck where he has hidden the keycard. Once in destination however, he is blown up by a ghoul suicide bomber.

Unable to continue fighting, he gives the Initiate the keycard and entrusts him with the task of stopping Attis' army and finding the Secret Vault entrance. Rhombus is left sitting near the truck, wounded.

Retrieved from "https://fallout.fandom.com/wiki/Escorting_the_Paladin?oldid=3054181"
Community content is available under CC-BY-SA unless otherwise noted.