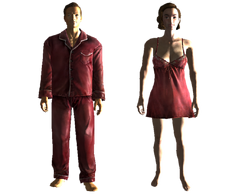 The escorts are cut non-player characters still present in the game's files of Fallout: New Vegas.

Male and female versions who are equipped with sexy sleepwear. They would have worked in the Atomic Wrangler casino, but at some point, it was decided in order to hire a prostitute, the Courier would have to go on a quest to find them first.

The escorts were added during the development stages of Fallout: New Vegas, but was cut from the final retail release of the game.

Retrieved from "https://fallout.fandom.com/wiki/Escort?oldid=3242474"
Community content is available under CC-BY-SA unless otherwise noted.