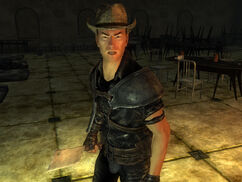 After the uprising at the NCR Correctional Facility instigated by Samuel Cooke, the escaped convict leader and about two dozen convicts following him decided to break away from the Powder Gangers and make their way south, eventually overrunning and occupying the town of Primm.

The escaped convict leader occupies the dining hall of the Bison Steve Hotel, wielding an Incinerator alongside three to five fellow convicts. He holds Primm's Deputy Beagle hostage in the adjoining kitchen.

The escaped convict leader appears only in Fallout: New Vegas.

Retrieved from "https://fallout.fandom.com/wiki/Escaped_convict_leader?oldid=3173605"
Community content is available under CC-BY-SA unless otherwise noted.