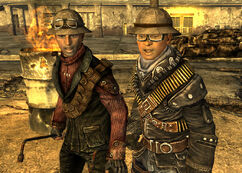 My Kind of Town
Why Can't We Be Friends?

The escaped convicts are two splinter factions of the Powder Gangers living in the Mojave Wasteland in 2281.

One faction (led by the escaped convict leader) has taken up a forced residence within the town of Primm within the Bison Steve Hotel. This is the largest group of escaped convicts seen during the Fallout: New Vegas storyline. The NCR 5th Battalion 1st Company has taken up residence outside of Primm to hold back the flow of Powder Gangers in the area. However, they are unable to retake Primm due to a lack of supplies and manpower, thus allowing the convicts holed up in the hotel to continue residing there.

The second faction, led by Philip Lem and Samuel Cooke, traveled to Vault 19 to take advantage of the sulfur deposits found there. They are attempting to form an alliance with the Great Khans.

Both groups of escaped convicts were originally detained at the NCR Correctional Facility, but when Cooke's coup was successful they splintered off on their own. One group invaded the poorly defended town of Primm, killing its sheriff and capturing Deputy Beagle. If Joe Cobb is aided in Run Goodsprings Run, afterward he will tell the player character that the guys in Primm aren't friends of his and they will still shoot on sight.

Retrieved from "https://fallout.fandom.com/wiki/Escaped_convict?oldid=3221192"
Community content is available under CC-BY-SA unless otherwise noted.