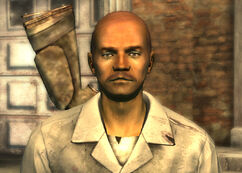 “Oh that's terrific! I knew you'd help out. Knew it in my gut, and it's never steered me wrong on a deal, yet!”

Ernest "Uncle" Roe is the mayor of Canterbury Commons in 2277.

Ernest Roe was born in 2238. He is 39 and was raised on a trade caravan. By the time he was 12, he could turn five caps into 50 with just a few clever trades. When he was 20, he set out to make his mark, using his sizable investments to found the trading post of Canterbury Commons with his sister Daisy. Nowadays, the Commons have become a regular stop for caravans in the Capital Wasteland. "Uncle Roe" makes sure that everyone gets enough from the caravans to get a good meal every night. He hass lost his sister, but he cares for his nephew as well as he can. With a bit of luck and a whole lot of caps, he hopes to eventually turn Canterbury Commons into a settlement to rival Rivet City.[1]

Ernest Roe appears only in Fallout 3.

Sometimes, Ernest's marker might lead you out of the map (e.g., north past Republic of Dave), thus making it impossible to finish the quest. [verified]

Ernest and Dominic in an endings slide
Add a photo to this gallery
Retrieved from "https://fallout.fandom.com/wiki/Ernest_Roe?oldid=3359870"
Community content is available under CC-BY-SA unless otherwise noted.
... more about "Ernest Roe"
RDF feed
Has platform
Playstation 3 +