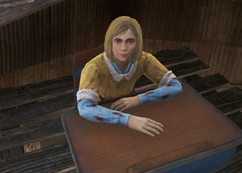 Erin Reische is a child living in Diamond City in 2287.

Apart from being a resident of Diamond City, Erin is a student at the Diamond City school run by Mister Zwicky. This is where she can be found during the day.

She enjoys math, which the other pupils say makes her weird,[1] but Mister Zwicky is extremely pleased with her math scores and is very keen on the idea of her working for the Science! Center when she's older, however Erin would rather join the Diamond City security team.[2]

Erin Reische appears only in Fallout 4.

Retrieved from "https://fallout.fandom.com/wiki/Erin_Reische?oldid=3330281"
Community content is available under CC-BY-SA unless otherwise noted.